Q1: Who’s this videogame for?

Q2: What’s the story like, and does it require any pre-existing knowledge?

The story managed to captivate me like few games have done recently. I enjoyed “living” in this world and interacting with its characters.

From the get-go you are tasked with reuniting with your family after a nuclear holocaust (wouldn’t be a Fallout game without it). As you explore the wasteland of the Commonwealth, you will come across several factions with interesting and sometimes contrasting ideas of how to rebuild the world after the war. You are able to join or ignore some of these factions, and pursuing their story lines to the end may pose some interesting dilemmas.

The story is standalone within the Fallout universe. This is because unlike Fallout 3, this game takes place in Boston (which happens to be where I live, so it’s awesome). The characters are also specific to this game, so you can jump right in without feeling like you’re missing out. Of course, there are a few nods to previous games, but they are small and don’t affect the overall story.

The game tends to have a serious tone, but it does have moments of great comedy and lightheartedness that help alleviate some of the overwhelming issues you come across.

The first thing to learn, which the game unfortunately struggles with a little is the leveling system, called S.P.E.C.I.A.L. (Strength, Perception, Endurance, Charisma, Agility, Intelligence, Luck). At first you are tasked with allocating points to specific attributes, which is hard to do without having jumped into the game first.

Shooting is intuitive and the V.A.T.S. makes a return from Fallout 3. It’s still brutal as ever, but the main difference is the fact that it no longer stops time, but slows it down instead.

Another major component is the building system, which can take a while to get used to, but it becomes very addictive. You can spend hours just perfecting every settlement to your liking. The main challenge comes from wrapping your head around the connection between collecting junk and using it in the most effective way to build. It just takes a little time, but it doesn’t detract from the enjoyment you get out of the game.

An improvement over Fallout 3 from a shooting perspective. I played this on PS4, so PC users may disagree, but overall I enjoyed this as a shooter. Guns feel powerful and responsive, and firefights always felt intense, all the way to the very end.

The building mechanics are also quite simple and easy to use once you understand the system. I found its versatility quite remarkable, considering I wasn’t navigating menus with a mouse and keyboard.

Q5: Does it have split-screen?

None to speak of.

As is expected from a Bethesda game, you can find beautiful vistas, great character models and voice acting, along with some performance hiccups and the occasional bug.

As usual, this game has a great soundtrack that accents action at the right moments, and transports you to an imaginary future surrounded by retro tunes from the mid-1900s. 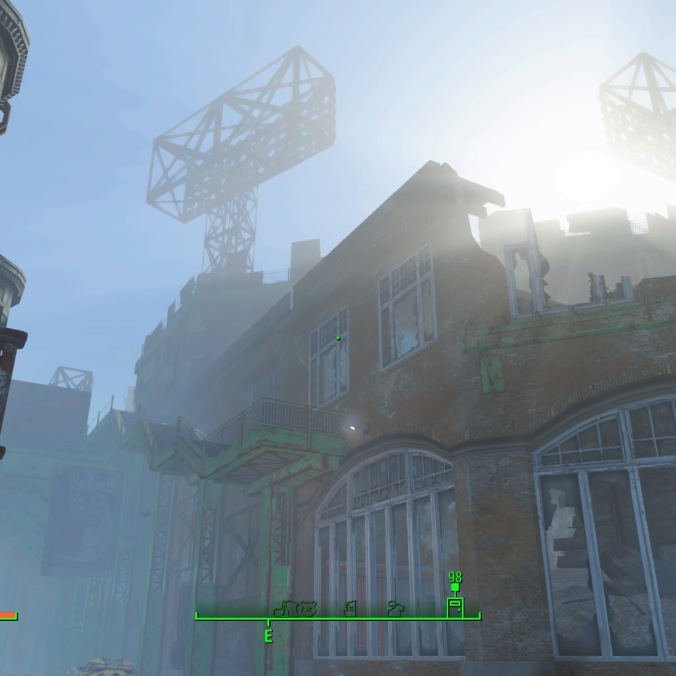 Fallout 3, New Vegas, and the upcoming Fallout 76 would be the best choices.

If you need something similar (from an RPG perspective), but in a different setting, go to Skyrim, or the Mass Effect series.

If you liked the building and settlement aspect, Fallout Shelter is your game (which is free, btw!).

For Bethesda shooters, Doom and Wolfenstein 1 & 2 are some of the best shooting games this generation.

Q9: Anything you wish you knew before going in?

I wish I had done more research on the S.P.E.C.I.A.L. system to make better starting choices, although it definitely didn’t ruin the game for me.

I’d also recommend looking at how other players have built their settlements to get ideas of good layouts or decoration (it’s almost worth having a Pinterest board just for that).

Easily one of the best games I’ve ever played. This is a world I really wanted to spend my time in, to explore, discover and build. I’m excited to play the DLC once I get the chance.

I've been a gamer since the SNES days and Donkey Kong Country was the first game I ever owned.
I currently work as a management consultant, and my console of choice is the Nintendo Switch, which I carry with me during my travels.